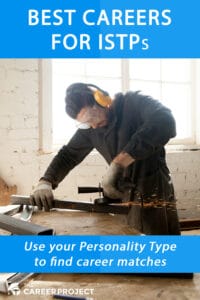 ISTPs tend to be recognized for their ability to solve problems and their innate mechanical ability.

In this article we will explore the different career options for the ISTP. We will explore an ISTPs strengths, what they can bring to the workplace and what careers they are best suited to!

Overview of the ISTP (The Craftsperson)

Nimble and a natural troubleshooter, the ISTP has a manual to tackle problems in their immediate environment. With an innate mechanical ability, they enjoy building and fixing objects, and mastering their skills toolbox – whether it be woodworking, crafting, or tinkering with computer parts. ISTPs are typically very attentive to detail, independent, adaptable and self-directed. They are very responsive to the demands of the world around them, and due to this they enjoy taking action and enjoying the physical and sensory experiences that the world has to offer.

The ISTP personality type is one of the “16 personality types” that we see in several different models based on the work of Carl Jung.  These models include the Myers-Briggs Type Indicator (MBTI) and Keirsey Temperament Sorter, among others. It represents an individual who is Introverted (I), Sensing (S), Thinking (T) and Perceiving (P). This indicates that they are a person who is energized by spending time alone, who focus on facts and details rather than ideas and concepts, who makes decisions based on logic and reason, and who prefers to be spontaneous and flexible as opposed to planned and organized.

The ISTP is often referred to as the “Builder” or “Craftsperson” because of their talent for figuring out how objects and systems work, mechanically. ISTPs are typically relaxed, cool, athletic, and easygoing. They want to be experts in their field(s) of choice and have above average levels of manual dexterity.

Many of an ISTP’s strengths lie in their independence and their ability to build objects. However, what makes them truly stand out at work are their characteristics such as:

ISTPs are fiercely practical and independent. They are likely to excel in careers where they can use their manual skills to build and create things. Such careers include ones in carpentry or as a chef.

The ISTP typically prefers a relaxed and independent approach to career direction, where they can have plenty of alone time. However, these careers must also allow ISTPs to use their troubleshooting skills to solve complex problems. Based on this, careers in engineering, surveying or computing are likely to suit ISTPs.

The ISTP typically prefers to work independently, with plenty of alone time. Based on this, ISTPs are unlikely to thrive in careers that encourage team working. Such careers may include in marketing, human resources or public relations. Similarly, profusely social careers, such as reception work, may frustrate and overwhelm ISTPs.

Typically, ISTPs lack emotional expressiveness and may fail to recognize when others need emotional support. Therefore, careers that require any sort of emotional support may want to be avoided. For example, nursing, counseling, therapy or childcare.

As with all of the 16 personality types, ISTPs will sit somewhere along the identity scale, which ranges from assertive to turbulent. This scale indicates how confident a person is in their own abilities and decisions and it triggers the way in which each type reacts to things.

ISTP-A and ISTP-T will express their shared features in different ways. Let’s take a look!

Assertive ISTPs are confident in their knowledge. They feel in control and have a steady mind-set. More so than other ISTPs, they tend to have a clearer, firmer vision of their intended approach to something. As a whole, ISTP-As are confident that they know the right way of doing things. Due to this, ISTP-As are unlikely to doubt themselves, or their abilities and knowledge, after making mistakes.

Turbulent ISTPs tend to lack confidence, especially in comparison to ISTP-As. They are far more self-doubting, particularly after making mistakes. Similarly, they are more likely than other ISTPs to compare themselves to others. They do this as a means to evaluate themselves and establish their self-worth.

However, ISTP-Ts are more curious than other ISTPs. They are restless in nature and tend to always look for new hobbies to apply their wide range of skills to.