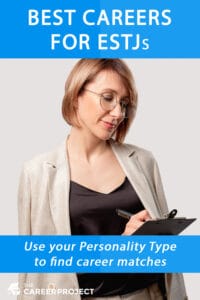 This article will explore the different career options for the ESTJ personality type. ESTJs are typically productive, accurate and enjoy taking charge.

In this article, we will explore an ESTJs strengths, what they can bring to the workplace and which careers they are best suited to!

Overview of the ESTJ (The Executive)

Decisive and firm, the ESTJ confidently carries out daily to-do items with confidence. They are sticklers for productivity and observable results. Growth and hard work are both etched on their forehead, so to speak. ESTJs tend to take charge and get things done correctly. They are typically very hardworking, rule-abiding and conscientious. An ESTJ likes to work in a logical and methodical way, they like predictability and want to bring structure to their surroundings. Due to this, ESTJs are often eager to take charge.

The ESTJ personality is one of the “16 personality types” that we see in several different models based on the work of Carl Jung. These models include the Myers-Briggs Type Indicator (MBTI) and Keirsey Temperament Sorter, among others. It represents an individual who is Extraverted (E), Sensing (S), Thinking (T) and Judging (J). This indicates that they are a person who is energized by spending time with others, who focus on facts and details rather than ideas and concepts, who makes decisions based on logic and reason, and who prefers to be planned and organized opposed to spontaneous and flexible.

The ESTJ is often referred to as the “Commander” or “Boss” because of their commanding presence and drive to accomplish more. ESTJs are typically direct, ambitious, by-the-book, and strong. They work methodologically towards their goals and maintain a sense of dominance in social and professional circumstances.

Many of an ESTJs strengths lie their ambitious nature and their ability to take charge and ensure things get done correctly. However, they truly stand out a work because they bring key characteristics such as:

ESTJs excel at organizing things, whether it’s people, projects or operations. Due to their commanding presence and confidence, they tend to rise to positions of power. Being the most talkative of all types, ESTJs are also incredibly sociable and enjoy working with people. Based on these factors, ESTJs tend to excel in high level management positions, where they can work with, or be in charge of, others. Such careers include as an executive, retail manager, director or marketing manager.

Many financial careers are suited to ESTJs. Their order, structure and ability to follow clear policies and guidelines allows them to excel in these careers. Not to mention, that many finance roles allow for career progression. Finally, on a similar note, an ESTJs conscientiousness and rule abiding nature makes them incredibly suitable to careers in law enforcement.

Like all of the 16 personality types, ESTJs will not thrive in all careers. For example, although they are creative, they may want to avoid careers in the arts. Often, these career are unpredictable, unstructured and not rigid enough for organized and structured ESTJs.

Due to their sociable and talkative nature, ESTJs may also want to avoid careers with little social interaction. Similarly, careers with little progression opportunities or the ability to work towards goals, such as data entry or assistant work, may frustrate ESTJs.

As with all of the 16 personality types, ESTJ’s will sit somewhere along the identity scale, which ranges from assertive to turbulent. This scale indicates how confident a person is in their own abilities and decisions and it triggers the way in which each type reacts to things.

ESTJ-A and ESTJ-T will express their shared features in different ways. Let’s take a look!

Like many assertive personality types, ESTJ-As tend to have high levels of self confidence. Because of this, they are more likely than turbulent ESTJs to consider themselves purposeful. They can be detached from their emotions and therefore at work they may appear insensitive and unconcerned to their colleagues. However, this emotional distancing makes them forgive others easily to solve conflicts!

Turbulent ESTJs have the same strong goal-orientation as their assertive cousins. However, they are more emotionally reactive and tend to take more of a defensive stance. They are quite easily angered, and therefore might want to consider less erratic careers.