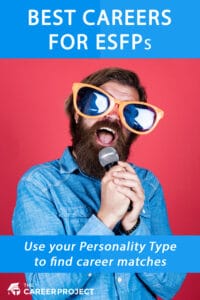 ESFPs are characterized by those who are sociable, energetic and spontaneous explores.

In this article, will explore an ESFPs strengths in the workplace. We will then look at, based on these strengths, which careers an ESFP is likely to be suited to. Enjoy!

Overview of the ESFP (The Performer)

Zesty and energetic, the ESFP knows how to let loose while raising the spirits of everybody around them. They enjoy exploring new places, and socializing with different people – ESFPs often have friends who fall under several cohorts and generations! ESFPs tend to be spontaneous, energetic, talkative, enthusiastic and fun-loving. They come across as playful and energetic, and take pleasure in the things around them and are playful with an open sense of humor. As a result, they are often the center of attention in social situations.

The ESFP personality is one of the “16 personality types” that we see in several different models based on the work of Carl Jung.  These models include the Myers-Briggs Type Indicator (MBTI) and Keirsey Temperament Sorter, among others. It represents an individual who is Extraverted (E), Sensing (S), Feeling (F) and Perceiving (P). This indicates that they are a person who is energized by spending time with others, who focus on facts and details rather than ideas and concepts, who makes decisions based on emotions and values, and who prefers to be spontaneous and flexible as opposed to planned and organized.

The ESFP is often referred to as the “Explorer” or “Adventurer” because of their craving for stimulation and excitement. ESFPs are typically cheerful, loud, active, and easygoing. They want to experience life to its fullest and enjoy each moment as it happens – the present is a gift, after all.

Many of an ESFP’s strengths lie their ability to delight and excite those around them with their warmth and good humor. However, they truly stand out a work because they bring key characteristics such as:

ESFP are active, sociable and spontaneous. They are likely to thrive sociable environments, with co-workers who are just as laid-back, friendly and enthusiastic. Careers in the hospitality and tourism industry are likely to inspire ESFPs.

ESTPs are motivated by delighting others around them. They need to feel like that are of service to others, and, as a result, are likely to thrive in careers where they can assist and inspire others. Importantly, as ESFPs are problem solvers, they are likely to feel fulfilled in careers where they can see real, tangible results for their efforts of helping others. Such careers include teaching, nursing, social work and various types of therapists.

Finally, ESFPs are often natural born performers and entertainers. They are tuned into their senses and often have an artistic streak. Based on this, ESFPs may feel accomplished in careers in the arts (performing or fine) or music.

ESFPs typically tend to be stressed by strict rules. In general, ESFPs have the tendency to get bored when working on long-term project. They prefer work that has immediate and tangible results and should avoid careers in architecture, computer programming and engineer.

ESFPs want to be excited, and to excite others. Unsociable and unexciting careers, such as accountants, actuaries or bookkeepers, may frustrate and stress ESFPs.

As with all of the 16 personality types, ESFP’s will sit somewhere along the identity scale, which ranges from assertive to turbulent. This scale indicates how confident a person is in their own abilities and decisions and it triggers the way in which each type reacts to things.

ESFP-A and ESFP-T will express their shared features in different ways. Let’s take a look!

As with more assertive personality type. ESFP-As are more comfortable with themselves than other ESFPs. They are in touch with their emotions, yet they are not that easily hurt by others. Because of this, ESFP-As are forgiving and have faith in people.

Unlike ESFP-As, turbulent ESFPs tend to be less comfortable with themselves. However, ESFP-Ts generally tend to use these feelings of unease to fuel self-improvement. Often, turbulent ESFPs have a drive towards a higher level of excellence. Similarly, ESFP-Ts tend to pay more attention to difficult matters. At work, this allows them to remain more aware and alert to problems as they arise.