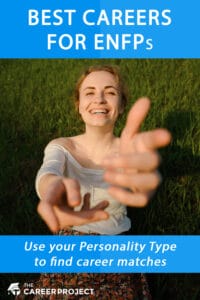 ENFPs tend to be bubbly and fun. They are given the nickname ‘social butterfly’ because they enjoy connecting with lots of different people.

In this article we’ll look at key career considerations for ENFPs. We will explore how they can use their unique skills and personality to get the most of out their working life.

Overview of the ENFP (The Social Butterfly)

Bubbly and fun-loving, the ENFP loves to connect with all sorts of people. Each individual has unlimited potential, and they’re right there to help each one of them realize it. Whether through workshops, seminars, or after-work happy hours – the ENFP is ready to bring their ideas for people into the spotlight. ENFPs are typically energetic, warm and passionate. They are often agile and engaging communicators with a strong artistic side; they use this to promote enthusiasm for new ideas, people and activities, and they encourage others to do the same.

The ENFP personality is one of the “16 personality types” that we see in several different models based on the work of Carl Jung.  These models include the Myers-Briggs Type Indicator (MBTI) and Keirsey Temperament Sorter, among others. It represents an individual who is Extraverted (E), iNtuitive (N), Feeling (F) and Perceiving (P). This indicates that they are a person who is energized by spending time with others, who focus on ideas and concepts rather than facts and details, who makes decisions based on emotions and values, and who prefers to be spontaneous and flexible as opposed to planned and organized.

The ENFP is often referred to as the “Social Butterfly” or “Communicator” because of their infectious energy and positive attitude. They also are no strangers to championing a cause, hence the nickname “The Champion” (the verb rather than the noun) is also often used for them. ENFPs are typically gregarious, warm, charming, and happy-go-lucky. They want to connect with people and understand how to create welcoming social environments for everyone.

Many of an ENFPs strengths lay in their charming nature and ability to create warming and welcoming social environments. At work they bring key characteristics such as:

Firstly, ENFPs are warm, positive, likeable and full of energy. They tend to be good with people and develop a wide range of personal relationships. Based on this, they will thrive in careers that are people-oriented and sociable.

Careers in sales, for example, will suit ENFPs as they are approachable and engaging. Sales careers are also likely to appeal to ENFPs because they lack structure and offer a great variety of tasks. Careers in public relations will allow ENFPs to be creative, all whilst focusing on building relations with others. Similarly, customer service roles allow the sociable ENFP to work closely with others and infect them with their positive attitude.

ENFPs tend to be creative and eccentric. Perhaps rather obviously, ENFPs will thrive in  roles in acting or photography, where they can be enthusiastic, be themselves, be spontaneous and be with others. Similarly, roles such as a director or producer allow ENFPs to be creative whilst motivating and influencing others. Thus, ENFPs are likely to thrive in these roles. Other creative roles, such as writing, will also allow ENFPs to express their uniqueness, emotionality and individuality.

Finally, ENFPs are likely to make excellent entrepreneurs. Their ability to take risks, network with others and  their positive attitude will put them at a good stance to start their own business adventure!

ENFPs are spontaneous and flexible. Therefore, they should avoid careers that focus too much on routine. Careers in finance, for example, can often be repetitive, rigid and often involve plenty of mundane tasks. Due to an ENFPs creative nature, they are likely to find these jobs draining and underwhelming.

ENFPs do not tend to have a natural aptitude for detail. Careers in engineers, mathematics or cybersecurity may not match ENFPs, who tend to look at the bigger picture and want to work with others. Similarly, environments that aren’t dynamic, energetic or sociable are likely to cause ENFPs stress. Based on this, they may want to avoid careers in science, data entry or surveillance.

As with all of the 16 personality types, ENFPs will sit somewhere along the identity scale, which ranges from assertive to turbulent. This scale indicates how confident a person is in their own abilities and decisions and it triggers the way in which each type reacts to things.

ENFP-A and ENFP-T will express their shared features in different ways. Let’s take a look!

Assertive types tend to be far more confident and self-assured than turbulent types. ENFP-As are much more likely to see themselves in a positive light, compared to their turbulent cousins. ENFP-As tend to have control over their emotions and deal effectively with stressors. They tend to not be overly bothered about the approval of others, which can hinder them in some situations as it may appear as a lack of care.

Turbulent personality types are characterized by lower confidence and lower self-esteem. ENFP-Ts tend to view themselves more negatively than their assertive cousins and, as a result, they tend to hang onto their mistakes for longer. However, this focusing on their mistakes can be a positive, as it allows them to explore the route of the problem and deal with it.