Maslow’s Hierarchy of Needs… and His Big Revision

This post introduces you to Maslow’s Hierarchy of Needs and explains how you can use it for a more fulfilling life, not just via self-actualization but also self-transcendence.

Introduced by Abraham Maslow in 1943, the hierarchy proposes that human motivation is a result of attempts to fulfill five very basic hierarchical needs. In order to live a joyful and fulfilling life, we must satisfy all the needs in the hierarchy. But, as the name suggests, we must first satisfy the lower needs before the highest ones are fulfilled.

The first 4 needs in Maslow’s hierarchy are described as ‘deficiency’ needs. These needs are satisfied in order to avoid negative circumstances and/or feelings, opposed to finding great pleasure and satisfaction.

The last need in Maslow’s hierarchy is called a ‘growth’ need – Self-Actualization. During this need, we are motivated by something deep inside us. We no longer care about the opinions of others and we do things for our own satisfaction – we are intrinsically motivated.

What many may not know, is that Maslow later added a sixth need just before he died. We’ll discuss that after first covering the initial five needs on the pyramid.

The first need we all aim to fulfill is our physiological need. This is the need for the things that allow for basic human survival. Such things include access to food, water, shelter, clothing and sleep.

Luckily, for many of us (at least in the developed world) we have these things without too much worry.

However, when we first start out in our career and are trying to find our feet in the world, we are often on a low salary. Most of us are focused on making enough money to pay our bills so we have a flat to sleep in, afford our weekly food shop and have enough left over to get some new work clothes.

At this level of our career, we are not focused on the bigger or deeper picture. We are fighting for survival… Well, modern day survival anyhow. Which means ensuring we have enough cash to move out from our parents house and live paycheck to paycheck. When we are at this level of Maslow’s hierarchy, we have trouble focusing our time and attention towards needs further up on the pyramid.

The second need in Maslow’s hierarchy, which can only me met after our physiological need is fulfilled, is safety. To fulfill this need, we must have a sense of security and well-being. Included in this, is feelings of physical safety (e.g., safe from abuse), economic security (e.g., having savings and/or investments) and personal safety (e.g., we have human rights).

We can expect to be motivated by this need at the early stages of our career. Most of our readers are fortunate enough to live in places where our basic human rights are met and we are free from physical danger. So once we are earning enough to survive more comfortably, we can start thinking about savings, investments or life insurance. So once again while focusing on fulfilling this basic need, it is hard to focus on much else further up the pyramid.

Once we settle our financial and personal security, our attention and desires can then be addressed elsewhere. To more ‘spiritual’ needs.

The need for love/belonging (sometimes referred to as social needs) is the next need that needs to be fulfilled in the hierarchy. This is the feeling of a sense of belonging or acceptance to a community. Humans are social creatures – even the introverts!

This is the need to avoid the uncomfortable feelings of feeling alone, isolated or depressed. This need is especially strong in our childhood, as we are so dependent on our parents. However, as we get older, it is influenced by the need to fit into a particular group.

At this point, many begin to think about our career on a less material level. Now we have the financial security to ensure we can pay the bills and are safe, we begin to think about our relationships with the people we work with. We will question whether we fit into the organization’s culture. This is when people become driven by their need to belong. They may chop and change jobs, in the hope to find a workplace that fills them with a sense of belonging and acceptance.

When we get to this point in our career, we may start to question WHY we are doing things. To be at this level, we are already financially secure, we are accepted by colleagues, and our friends and family outside of the workplace. At least relatively speaking. We will start to seek things that we view as worthwhile and will begin to look for ways we can progress to career positions with additional responsibility and/or recognition.

The need to reach self-actualization is the final need in Maslow’s hierarchy. At this point, we are looking for growth and seeking positive emotions and feelings.

Maslow said “what a man can be, he must be“. And self-actualization is the need to become what we believe believe we truly are… what we are truly capable of. When we are truly self-actualized, we are accepting of ourselves. We believe we have a core purpose in life and we are true to ourself, being no longer dependent on esteem needs.

Typically, we won’t feel the desire to fulfill this need until later on in our career – and often later in our lives in general. We cannot strive for personal growth until all our other basic needs are met and our mental space is freed. We start to consider the meaning of our career, our work, our life, our hobbies and how they aid personal development and/or contribute to society.

To truly become self-actualized, you need to assess your life. Ask yourself where have you been, and what has this taught you? Where are you going? Is the life you life truly rewarding and meaningful? You need to understand your skills and drives. Finally, its also helpful to formalize a vision for your life by writing a personal mission statement.

Maslow’s Hierarchy of Needs is a widely accepted model in the field of psychology. What is not as commonly known about Maslow is that toward the end of his life, he began to have some doubts about this model. In his personal journal, published only after his death in 1970, Maslow wrote:

“All sorts of insights. One big one about [self-actualization] stuff, brought on, I think, mostly by my deep uneasiness over articles. . . . I realized I’d rather leave it behind me. Just too sloppy & too easily criticizable. Going thru my notes brought this unease to consciousness. It’s been with me for years. Meant to write & publish a self-actualization critique, but somehow never did. Now I think I know why.”

Maslow was unhappy with self-actualization being the final need in his pyramid – the pinnacle. During self-actualization, we are still focused on oneself. And generally speaking that selfish pursuit of self-fulfillment ends up feeling shallow. In a great paradox, by focusing on reaching self-actualization you can’t ever truly attain it. To truly be satisfied and fulfilled as a person, we must focus on more than ourself – we must look externally.

As such, towards the end of his life Maslow added a new pinnacle to his hierarchy: the need for self-transcendence – following a very important conversation.

As we’ve just learned, self-actualization refers to fulfilling our own potential. Whereas, self-transcendence is about transcending the self to focus on something “bigger”. It is a shift in value from the self to something greater – another person, society as a whole, the universe, etc.

Self-Transcendence is the realization that you are a small part of a greater whole, and that you must take responsibility for the world and society.  It is only in putting others ahead of yourself (through self-transcendence) that one is able to actually achieve self-actualization.

Maslow made this revision following a conversation with Austrian psychiatrist, Viktor Frankl.

As stated by Frankl:

People who have successful fulfilled their self-transcendence need often have what Maslow called ‘peak experiences’. In such an experience, they transcend the individual ego and one feels intense joy, peace, well-being and an awareness of the ultimate truth and the unity of all things.

Abraham Maslow, in his “hierarchy of needs,” said that once basic needs (food, shelter) are met, then the intangibles such as love, meaning, and self-actualization can be fulfilled. But my grandfather disagreed. He told Maslow how people did not have their “basic” needs met in the concentration camps, but it was the “higher” needs (i.e., meanings, love, and values) that proved to be much more relevant to their chance of survival. Maslow revised his ideas and said, “Frankl is right.” My grandfather emphasized that it’s not about “having what you need to live” but asking yourself, “What am I living for?” The most affluent societies have all their basic needs met, but they lack something to live for, and neurotic disorders tend to increase.

The humility that Maslow must have had to admit the error and revise his model – after all of the notoriety he received – is impressive. It’s almost as if he cared less about his own ego and more about the impact of his work on society as whole. A true final lesson in self-actualization for all of us.

P.S. – If you want to learn more about Frankl, see these other posts I’ve written:

P.P.S. – Check out this post about Effective Altruism if you want to learn more about how to make a positive impact on society through your work. 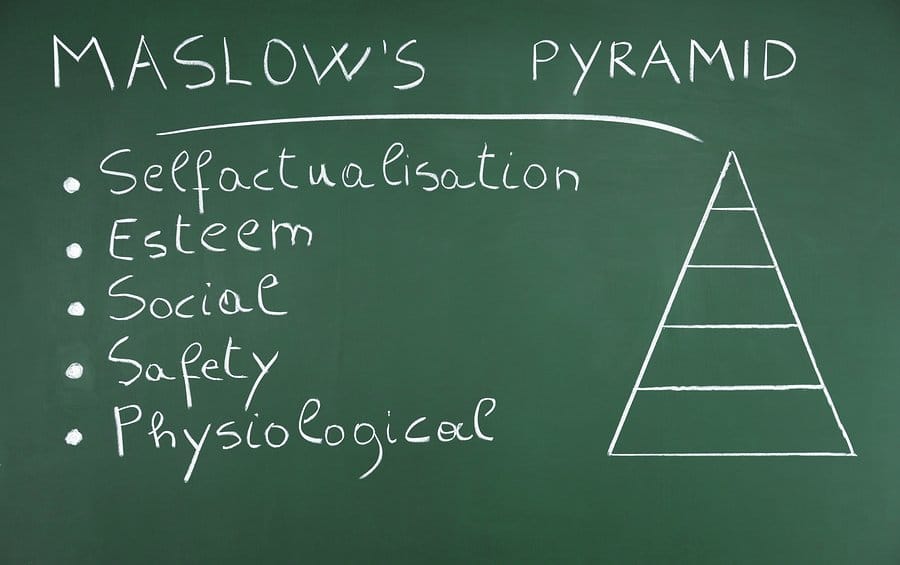